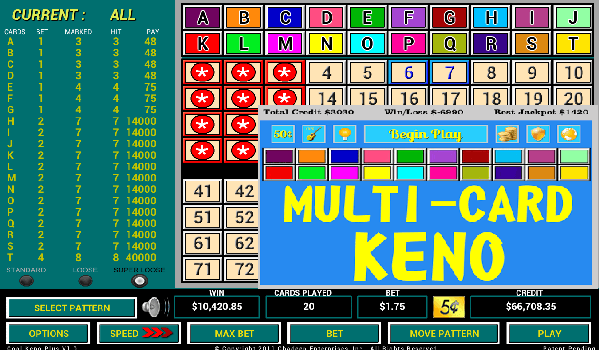 When playing Keno you often think which game to choose from a Single Card Keno game or a Multi card Keno Game. The truth is both the game are good on their own ways and it all depends how much you know and understand the game which makes your decision right in choosing one of them or trying your hands on both. To know much better about the two games let us first know what they are, their advantages and disadvantages along with their features that might interest you.

Single card Keno, as the name suggest consists of a single card. It is simply the basic version of Keno where playing is with one card and a set of numbers at a single time. You can focus on the game and the set of numbers more easily with a single card. The single card version has its odds largely constant, the bets do not increase or decrease the short term or long term odds of winning the game.

When you choose Multi card Keno you ca play up to 20 cards at the same time. This form of game features great variety like the four card keno game. This allows you to play four games of Keno at an instant where each game costs about one credit to play. The wage increases according to the number of cards you choose. Compared to other multi-card Keno, a four card Keno would be just as comfortable as the single card game. It is less boring and you will be able to play the same spots across four different cards.

In Multi card keno playing all the available cards will increase the wager by a factor of 20 from the single card keno. If you are used to playing a single card at one credit on a quarter machine, your bet will easily increase to about $5 if you choose to play all the 20 cards on one coin.

Finally it is your choice which game you wish to play and enjoy. If you can stake more and also love fast paced action then multi card Keno is best for you. But if you do consider not to lose much by playing more cards then it is better to go for single card and have fun.