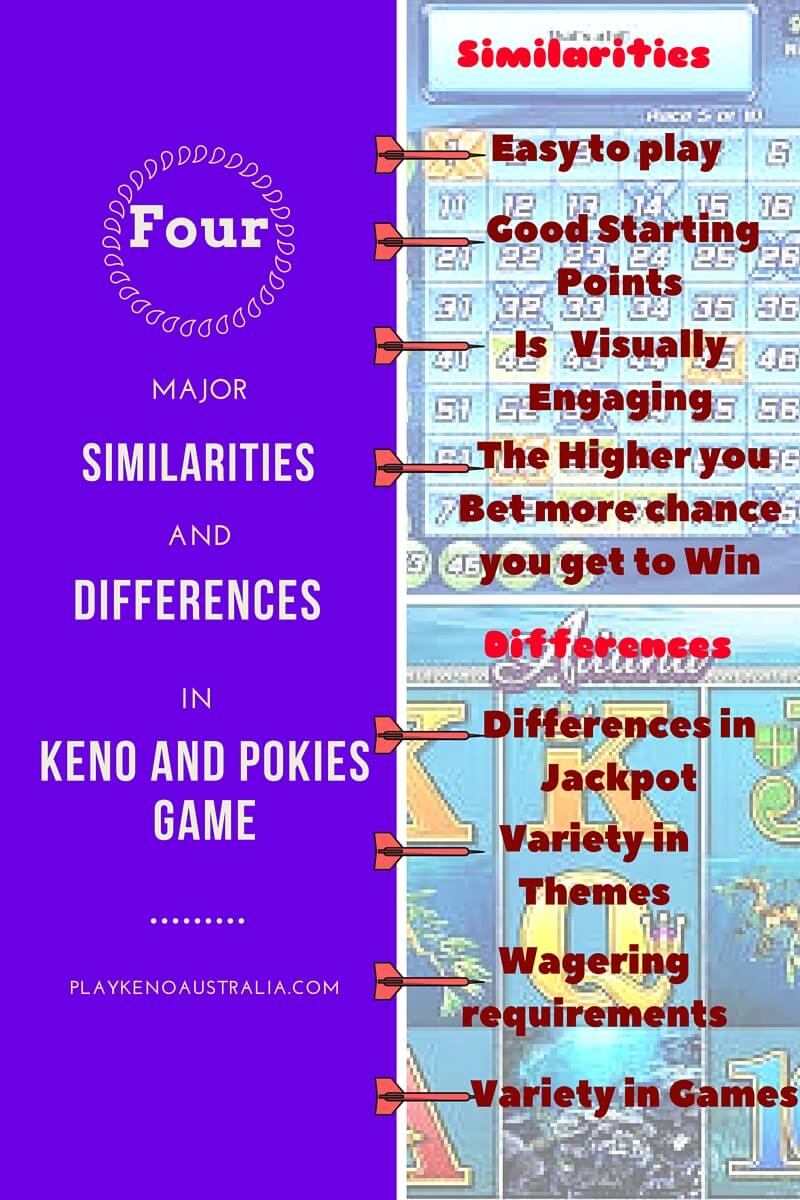 The similarities between Keno and Pokies Game

Both Keno and Pokies games are easy to play. You do not require any skill or any strategy to play these games. Both the games are based on your luck and are therefore a game of chance where either you win or you lose.

Keno and Pokies both offer good starting points as said above they both do not need any  technique to play the game. Both the games cannot let you increase your chance of winning by any special skill or methodology to play.

When you play Keno or Pokies at any online casino or land based casinos the machines are visually engaging. That means the graphic qualities and the animation with sound affects developed by the software gaming companies like Microgaming and NetEnt are superb and often attract the players.

Whatever game you choose be it Keno or Pokies to play at the casino you winning depends on which your betting or wagering. The amount of money you can win from a single game depends on the game you play.

If you are playing Pokies then the amount you can win is based on how big your wager is  and how many active paylines are in play.

Same way the amount you can win in keno depends entirely on the game you’ve chosen as well as the wager you have placed. Betting on more numbers in keno means the chances of hitting one of those numbers is increased compared to only betting on a couple of numbers, while choosing to bet on only a couple of numbers means you stand to win a higher amount if you do have a hit.

The differences between Keno and Pokies Game

When you play video pokies game at the casinos that compare it with Keno game you will find that Keno does not have much variety of themes. Whereas Pokies games come in variety of themes to enjoy with bonus features, bonus games and more of graphics at display. Keno has limited use of graphics with few themes often being a plain numbered board to play the game.

When you play pokies games you must have seen that these games come with huge jackpots, like progressive jackpots Mega Moolah starting with a base jackpot of $1 million and increasing all the way into the tens of millions, while some basic pokies only have jackpots of a few hundred dollars.

Pokies games played at  online casinos have bigger jackpots than online keno, whereas land based keno has produced many multi-million dollar winners.

The betting requirements for keno and pokies depends on the individual game you’ve chosen to play. Pokies can be played online for wagers starting from one cent per spin, while few  games will allow a maximum bet of up to $300 per spin.

Whereas wagering in online keno is limited to a minimum bet of $1 and a maximum of $10. This difference in Wagering requirement therefore attract players to pokies with even small bankrolls to make their money stretch further but only if playing the minimum bet on a low wager game.

Pokies and Keno have difference in game variety. The huge selection of great pokies can be found at all leading online casinos, while keno isn’t always an option. Casinos that do offer keno are usually limited to a couple of keno variants per site, while some casinos have over 900 pokies from reputable software providers. Also pokies games are more to be found to play  with mobile various mobile devices be it Apple, Android, Windows or Balckberry

Though you have come to know of the similarities or differences in the two casino games, it is but the fact that both are fun to play and enjoy as well as offer good wins. The choice to play the games be it Keno or Pokies is yours.