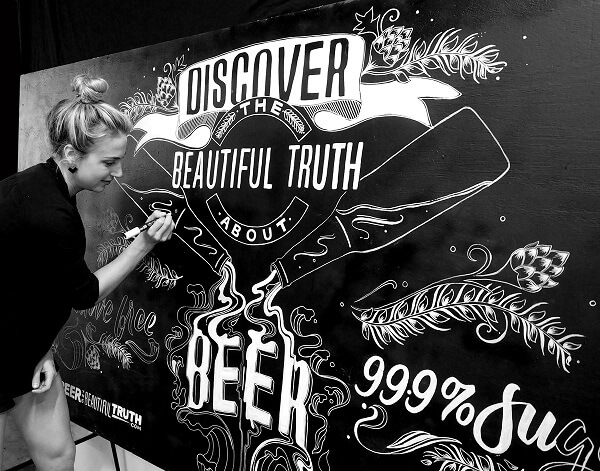 Lion is going full throttle with its new campaign that aims to educate people on the benefits of consuming beer. The Beautiful Truth Campaign has hit the ground running with their new outdoor campaigns across Australia. Their goal is to spread awareness about the ingredients of hand crafted beer along with its nutritional value. For too long people have been unaware of what’s in their beer. This new campaign is advocating the labeling of ingredients to educate people about what they are drinking.

Ben Slocombe, Lion’s marketing director category and planning, described the campaign as a long-term commitment. Lion has had this idea in the works for a long time & they intend to continue running it to educate future generations about what’s in their bottle.

“It’s taken us about two years to get to the point that we’re at now,” Slocombe said. “So that’s a lot of organisational effort and we see this as a long-term campaign, a long-term platform and we want to continue the conversation, years down the track with Australians. So it’s not a short-term, one summer burst, this is a long-term conversation that we want to have. It’s going to take some time for it to sink, for us to have this conversation and the believability of it to be explored by Australians. There are so many myths and incorrect facts that pervade, so it’s a long-term job but one that we are committed to.”

“During our research we found out that they were the two big things that Australians wanted to learn about with their beer. There are other points in terms of calories, carbohydrates and best enjoyed responsibly. So there are five claims, but the two that will lead in our advertising are 99.9 per cent sugar free on average and preservative free.”

Lion has put all hands on deck to get this important campaign off of the ground. The quality of information and beauty of the website showcases their keen attention to detail. The campaign will focus on addressing people’s concerns about whether there is a high content of sugar & preservatives are in their favorite beverages. The new campaign hopes to reinvigorate people’s passion for beer by showing them the raw facts. They plan to reach more people by not sugar coating the truth and being transparent.

The Beautiful Truth campaign will undoubtedly be a smash hit with younger people in Australia. Aussies are known to be devout lovers of fine crafted beer so this campaign should explode in popularity like a can of gasoline thrown onto a raging fire. So now all of the people who were previously on the fence about drinking beer can finally choose sides. This campaign is designed to have people proclaiming from their rooftops: “Drink beer, it’s organic! There’s little to no sugar & 0 preservatives!”. It will be interesting to see what impact this campaign ends up having. If it convinces people who are hesitant to drink because of dietary concerns to pick up a bottle Lion will be rich. If not Lion still has its legions of existing customers who don’t care about calories. So either way Lion wins. After all, it’s not like we didn’t already have enough excuses to drink beer…