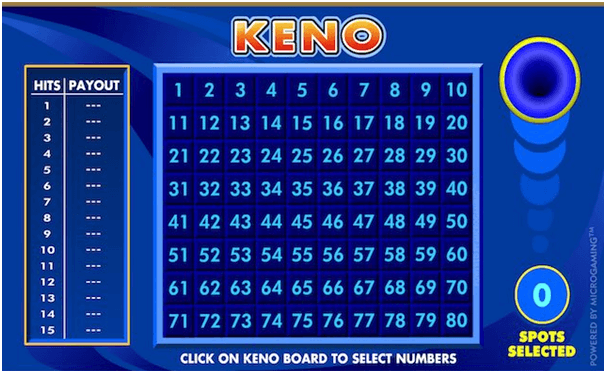 Many experts of gaming believe Keno to be a suckers game as it is believed to be entirely the game of chance based pure on your luck. A lottery styled keno game the odds of taking out a big win are incredibly low. Gamers also say that the chances of winning a Keno jackpot are the same as winning your Keno Tats lotto and creates winners by the random luck of the draw and the outcome of the game is completely out of your control. But many players who love this game believe there are certain strategies that can be engaged to increase the odds of a Keno win.

But despite its high volatility, real money players shouldn’t be too put off as there are some big AUD to be won in Keno. The odds may be a lot worse than other casino games, but the jackpots are much more life changing. Therefore understanding how the game works and the associated odds will help give a better insight into what your actual chances are of winning in keno and how to gamble responsibly.

The Odds and House Edge in Keno

In each game of keno it is specified as how many numbers players are allowed to choose, which is usually capped at 10, but sometimes at 15 or 20. Players select their desired amount of numbers from one to 80 before the randomly it draws 20 numbers with the hope that they will match the ones selected by the player. Each keno game has a different pay scale, with different winning values for the amount of matching numbers drawn. Despite some arguments that suggest certain numbers carry higher chances of being drawn, each number strictly has a one in 80 chance of being drawn, making the house edge in keno the highest house edge in online gambling.

The house edge in online Keno varies from casino to casino. Typically the online keno house edge can range from 4% to over 35%, with the average house edge falling round the 30% mark. The reason for the high variation in the house edge is that different games have different rules regarding the minimum and maximum number of matches that players can bet on in a keno game.

No matter what your personal keno strategy, players should maintain responsible gambling practices when betting for real money in keno as the odds are definitely against you. In fact, there has been no record of a real money gambler ever winning all 20 numbers in online keno, which isn’t surprising considering the odds of a 20 number jackpot have been calculated at a whopping one in 3.5 quintillion.

Tips to improve your odds at online Keno 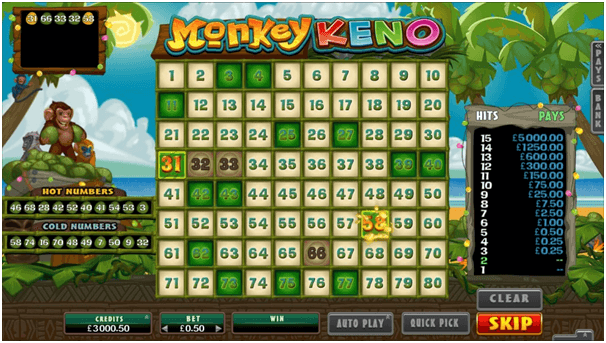 To improve your online keno game odds many strategists believe the best way is to play as many numbers as possible, where others believe the exact opposite, that placing a bet on fewer numbers actually leaves you in a better position.

On the other hand the downside to selecting as many numbers as possible is that it becomes harder to match them all. Looking at the list of odds above, you have a one in three chance of landing one number, but increase that to two and your odds diminish hugely. Therefore, each online keno game costs the same amount whether you bet on two numbers or 10 so you might as well bet on as many numbers as possible to increase your chances of getting a match on at least one of them.

The online gambling strategists believe that when it comes to keno, there can ultimately be no strategy beyond where you play and how much money you bet. Despite all such opinions, keno is a game of luck that requires zero player skill. Winning numbers are drawn at random and results can’t be altered in any way.

Also bets play an important role in playing online keno. If you place the right bets, keno odds are on par with online pokies machines, hovering around 95%. Placing the wrong bets, however, you could be looking at a house edge as terrible as 75%. So you need to know which are the worst and best keno bets to make.

The absolute worst keno bet you can make is, unfortunately, the one most new players start with. You should never, ever, under any circumstance, select just one number. You have only a 25% chance of this number catching, and it only pays 3:1 if you do. The expected return to player (RTP) is an abysmal 75%.

Next up are a series of keno side bets that casinos came up with in order to swipe as much extra money off their inexperienced gamblers as they possibly can. Like most side bets, these are sucker bets, so don’t make them, ever. They are known as Heads, Tails and Evens.

Therefore the above wagers should be avoided and stick to mid-range selections of 6-9 numbers, where the RTP typically hovers around 92-95%. These are the best keno bets of all. To know which has the absolute highest RTP, you’ll have to refer to a specific game’s paytable, and the number of selections you’re allowed to make. Microgaming, for instance, offers an online keno game with max 15 spots. In this version, the best bet is 9 numbers, carrying a 94.90% RTP.

But your best bet when playing online keno is to make sure you play at a reputable online casino and  bet within your bankroll and do not chase the loss. When playing keno for real money simply taking into account that the house edge is high while the chances of taking the jackpot are low will improve your keno experience as you can enjoy the game and play more for fun and be positive with your luck to make you instant millionaire.