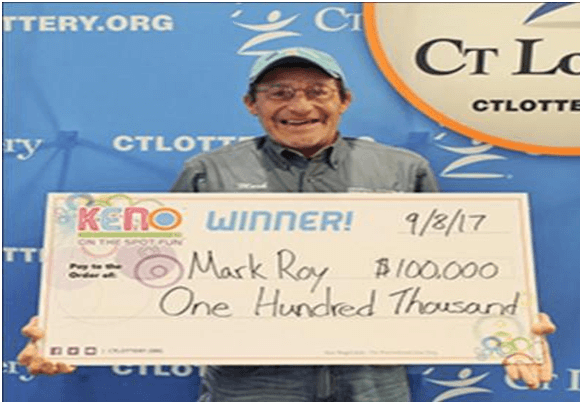 It was  an exciting moment for Mark Roy an aged man from Groton who became the state’s top Keno winner when he won a total of $300,000 in September 2017. In 2016 also this man had won the Keno jackpot at the same tavern. While playing Keno at the Gatehouse Tavern in Groton, Roy matched seven of the seven numbers on his $20 ticket. Since the bonus multiplier was 2X, Roy’s prize was automatically multiplied to $100,000. In 2016, while at the Gatehouse Tavern, he won $200,000 by playing those same seven numbers. Because those numbers matched the seven selected by a computer  and the fact that he 4X multiplier,  his $50,000 prize was quadrupled.

Mark Roy is from Connecticut Groton town that is located on the Thames River in New London County, Connecticut, United States.  Because he won more than $50,000, Roy couldn’t get his payout at the tavern. Lottery rules required him to go to CT Lottery headquarters in Rocky Hill to claim his prize. Twenty dollars is the maximum amount you can play on each Keno game that has the numbers picked on a lottery terminal. The Gatehouse Tavern on Eastern Point Road is across the street from where submarines are built at the General Dynamics Electric Boat complex.

In June 2013, the  Keno game had been approved by the state Legislature, but lawmakers rescinded it the following year amid concerns over expanding gambling. That changed when the state’s fiscal crisis began to worsen. The game was authorized in 2015 as a new source of revenue to help plug expanding deficits.

Because the state has a gaming compact with the Mohegan and Mashantucket Pequot tribes, it gives each of them 12.5 of gross operating revenues Keno. Keno that was rolled on April 25, 2016, can be played in bars, restaurants, delis, grocery stores and even at the VFW post in Stratford.

The acceptance of Keno – a form of bingo in which numbers are drawn every four minutes — has been widespread across the state and in Fairfield County. Another factor in Keno’s success is the game has been offered in New York, Massachusetts and Rhode Island for years, so many state residents were already familiar with Keno when it was launched.

According to CT Lottery minutes, Keno has performed above expectations with $72 million in sales in the 2017 fiscal year. The minutes said CT Lottery expects transfer $330 million from all CT Lottery games – the second highest amount – to the state’s General Fund for 2017 fiscal year. Officials said about 20 to 25 percent of the profit from a lottery game is returned to the General Fund. In the 2016 fiscal year it sent the state $335 million, a nearly 6 percent increase over previous year.

What were the winning tips for Mark Roy

According to Mark Roy the Keno numbers mean something to him and he used all the family member’s birthday numbers.  The other winning tip he says was his positive attitude as he kept thinking that something good was in store for him as he picked the Keno numbers to play.