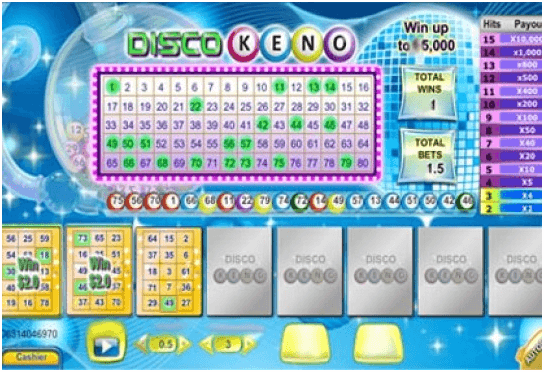 Disco Keno- The name itself raps your mind to dance and tap your feet. This keno game is a scratch card game which is a mix bag of two excitement and fun filled games that is Keno and Bingo too. This game is designed by Neo Games and is an online instant game where you can really win big. So that means in this action packed Keno variant you can play up to eight keno games at once and walk away with some huge cash prizes.
The game has the standard keno format and you get a chance to play up to eight keno cards at a time. Instead of picking up to 20 numbers on the grid like you normally would, in Disco Keno you simply pick the number of cards you wish to play and the amount you wish to bet. The cards come with pre-selected numbers, similar to a bingo card. The theoretical RTP (return to player) in Disco Keno is 93.51%.

The format of Disco Keno

When you start the game to play you at once hear the funky music and the beat wants you to tap your feet to the tune.. You are in control of how big a bet you are playing with and you can choose to play with as many as 8 bingo cards or as little as 1 bingo card. Play Disco Keno online instant game in turbo speed if you are in a hurry or leave it at the regular speed to enjoy your game. 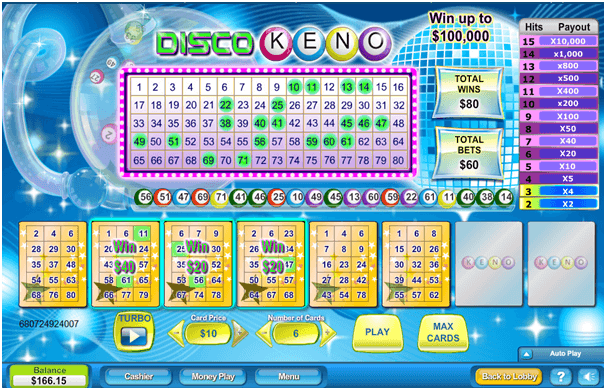 When you play Disco Keno online instant game it really gives you the feeling that you are going to have a great time playing this game. The background has been given shades of blues with a lot of sparkling lights reflecting from the huge disco ball hanging above the 8 possible bingo cards. Next to the disco ball you will find the big bowl that is holding all the bingo balls in until it is time to release one at the time. Once the game has begun the bingo balls will roll through the clear tube and end up displayed above your bingo cards. Above the bingo balls you will be able to see all the bingo numbers that has been called on the board. The bingo numbers that has appeared will be marked in a green colour so it’s easy to see. The same colour has been used on your bingo cards. Once a number has been called the bingo cards with the matching number on will be highlighted green.

How to play Disco Keno

Disco Keno uses 80 numbers. The Keno machine picks 20 numbers at random and the more you match on your 15-box Keno card, the more you can win. So like most scratch games, Disco Keno is full of instant pleasure. You choose how much to bet and  you choose how many cards to play and then watch the numbers emerge from the Keno machine. Like in bingo, you can then cross off which numbers you have on your card, although the computer will work it out for you when all the balls have been drawn and then let you know how much you have won.

If you want the game to speed up and have the bingo balls appear faster, you can click on the ‘Turbo’ button to increase the speed of the game. When you are happy with your choices, click on the big “Play” button and the Keno machine will begin shooting balls out into the transparent tube. Each time a ball comes out it will flash and if you have the same number on your scratch game Keno card it will be highlighted on the card. After all the balls are out the computer will show you how much you have won.

How to win Disco Keno

When playing the online scratch cards version of Keno with Disco Keno you are given the chance to win on up to eight Keno cards at one time. This is an amazing opportunity not to be missed, because it means that even if you don’t win with one card you may win with another.

The Disco Keno scratch game allows you to choose how much you want to bet on each card and how many cards you would like to play. The more you play, the higher your chances of winning. The payout table on the right of the screen shows you how much you can win, from doubling your money if you match one number, to earning an incredible 15 times your money if all 15 numbers on your Keno scratch game card are pulled from the Keno machine.

So as you need to match at least two winning numbers on your card to win the smallest amount possible. Unlike most other online keno variants, you don’t have control over how many numbers you bet on per round, and therefore the pay-scale for payouts is fixed, making it easy to understand how much you stand to win. All wins in Disco Keno award a certain multiplier of your current active bet as follows:

This means if you’ve bet $10 and you land two hits, you’ll receive double your wager, walking away with $20, and so on. The higher you stake, the higher you win.

Where to play Disco Keno

Disco Keno can be played at online casinos for real money as well as free for fun that is but your choice. It’s available for instant-play directly over your Web browser, so you can get stuck into the action right away without having to bother with any downloads. Also many online casinos accepts AUD currency, with deposits available using trusted payment methods at the casino like Visa, MasterCard, POLi, Skrill, Neteller and Paysafecard.

Alternatively, when loading Disco Keno you can click the ‘demo’ button to try this game for free in practice mode so you can get a hang for it before risking any of your own money.

As you have play and find all variants of keno as a game based on your luck and chance same goes for this game. The more you play the more you have the chance to win but remember that you need to stick to your bank roll or budget in playing any game you like. Play within your limits and have fun playing Keno all the time.