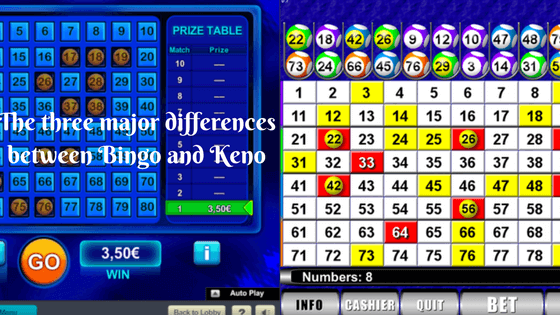 When you sit to compare Keno and Bingo they look alike to you. If you are playing in a land casino you may feel a bit difference and when you play online then major differences can be seen. The only similarity in these two games is that both are played with numbers, and have numbered cards or boards or tickets as you call and players are rewarded for their numbers coming up. So here you can understand the three major differences between Bingo and Keno.

1. The number board and card in two games

When you look at the number board or cards of two games they are completely different.  Bingo has players buy printed cards at a set cost, which means wagers are fixed with numbers laid out in a random order, with every card different from the other.

The bingo card is valid for one game and you also don’t have any choice as to what numbers are on the card as they’re pre-determined before the game rather than selected by the player. You can but choose how many bingo cards you can buy and play the game.

The Keno number board or card is where you need to choose and mark your numbers on Keno forms, usually anywhere between 1 and 20, from the total available. You also have the choice to bet what you want on each game, and how many games each set of your chosen numbers can be played.

2. The wagering or betting differences

Have you seen Bingo numbers being drawn? They are drawn at random. The caller ceases to draw numbers when a player calls “Bingo” with a full game card covered, which signals the winner. There is typically just one winner, as the pre-determined numbers on the card ensure they are always different.

Where as in Keno numbers (typically 1 to 20 in live games) are drawn and because up to 20 numbers can be selected by the player rather than randomly given, more than one player can win with the same numbers.

With bingo, you don’t really place a bet as such. You simply purchase your cards for a set amount of money, and aim to be the first player to complete a card, pattern or line. The odds can be tilted slightly in your favour if you buy several, rather than just one card.

Keno is also generally more involved than bingo as several unique bets can be made in addition to standard bets, such as Way Bets – sets of numbers on a ticket. You can choose a different bet every time, and you control how much that it will be. You can use your set of numbers for multiple games if you wish. Normally, there are two types of bets associated with the game – straight and way bets. With the straight variety, you’ll need to pick your numbers and place the minimum wager on each race. With way betting, your chosen numbers are divided into different sets. This allows you to not only win if all your numbers come up, but also win if sets of numbers are drawn.

3. Payout in Bingo and Keno

When you win bingo, your prize awarded by the bingo hall depends on the numbers covered. A full bingo card covered ( also known as“Full House”) is a typical win, as is complete rows and columns of numbers. Depending on the operator, side jackpots or additional prizes that can be awarded.

In Keno you can choose your own numbers and several can win with equal opportunity with the same said numbers, the game employs a set payout structure to ensure an equal payout.

Besides these three major differences  you should know the game play and rules of both the games. In the standard version of keno it is very similar to playing a lottery, as you are required to punter on numbers of your choosing. You’ll need to wager on between one and twenty numbers, and in every round, twenty numbers are drawn. To win the jackpot prize, you will need to match fifteen of yours with fifteen of those that are drawn. You can still win smaller amounts of money for matching fewer numbers, but the amount depends on which online casino you are playing at.

With bingo, there are many different variations of the game; common examples include 90-ball, 80-ball, 75-ball, 30-ball and five-line. The aim depends on which version you’re playing, but usually, you’ll need to either cover all the numbers on your card as said above known as a full house or coverall,  get one or two horizontal, vertical, or diagonal lines, four corners and the centre number, or complete a pattern. The jackpot is normally awarded to the player who is first to complete their card, whilst lesser prizes are sometimes given to those with one or two lines, and in some circumstances, players with one-to-go and two-to-go.

On a side note if you want to know the origin of both these games then Keno is oldest games mentioned in history that came from China. It was invented by Cheung Leung, in the rule of the Han Dynasty about 3,000 years ago. It’s believed that the reasons for its creation was to raise funds for an ongoing war, and prevent the need for Leung to have to raise public taxes. It quickly gained popularity and became known as the “white pigeon game”, named after the white birds that were employed to fly winning numbers across the vast countryside.

Bingo, on the other hand, originated in the early 16th century over in Italy. Known as “Lo Gioco del Lotto d’Italia,” it started life as a national state lottery, which still runs today, in most of the world today and players love to play this game.

It is your choice which game to select Bingo or Keno. If you prefer to rely on your own luck and something more relaxed, bingo is your game as it’s straight-to-the-point; buy a pre-determined numbered card and wait and see if you are lucky to win. But if you prefer relying on your own lucky numbers to win, keno is the one for you.

Finally one can say that both games are equally as fun to wager and win real money and can be played with the same thrill and excitement..your heart throbs faster when winning numbers are drawn, right.