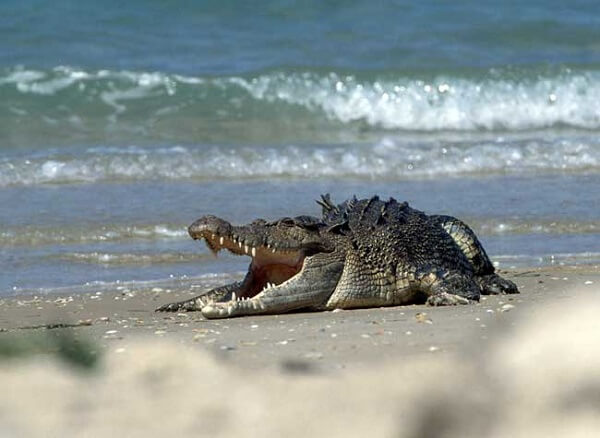 Climate change is not just making Southern Australians miserable with the heat waves, it’s threatening the existence of crocodiles. Thanks to the shocking rise in temperatures now we aren’t the only species being affected by these high temperatures.

While the headlines of fires & people being hospitalized are currently stealing the show a recent study has revealed dire repercussions for the survival of crocodiles. The unprecedented rise in water temperature is making crocodiles abandon the water to pursue colder temperatures. If things keep progressing at the current rate this could devastate Australia’s saltwater crocodile population.

The University of Queensland released an eye opening report that highlighted the troubling effects of climate change on saltwater crocodiles. According to the study, the rising temperatures of the ocean are causing crocodiles to opt out of spending time in the water. While this may seem harmless, the time spent in the water is crucial for the survival of crocodiles. Normally crocodiles spend 11 hours of the day submerged in water, taking advantage of this time to feed & reproduce.

“We thought that crocodiles, like many animals, would adjust to temperature changes so life continues,” he said.“However, we were surprised to find they had little capacity to compensate for water temperature changes and seemed to be hardwired to operate at certain temperatures. We are not sure what this means, but it’s likely that if the water is too hot, crocodiles might move to cooler regions, or will seek refuge in deep, cool water pockets to defend their dive times.”

“Their submergence times halved with every 3.5C increase in water temperature,” added lead author and PhD student Essie Rodgers. She also pointed out that the high 30s to low 40s was the “upper lethal temperature” for crocodiles.

Even though the plight of our crocodiles is alarming, the drastic effects of climate change on humanity are pushing this study into the shadows. With the climate talks in Paris generating nothing but controversy & empty promises from politicians, it’s hard not to be worried about the future. Now that more and more areas are experiencing warm winters it’s becoming an inconvenient truth that we can no longer ignore. Finding the perfect solution to free ourselves from our dependency on energy sources that are destroying the planet is proving to be easier said than done.

If we continue perpetuating the same cycle we are going to be left with a planet that’s uninhabitable. While this news is doing a great job of fueling an international race to space, we have to remember that running isn’t always the best option. It’s shocking that the idea of running to another planet after we have trashed this one is becoming a more appealing option than changing our energy sources.

Sooner or later we have to confront our destructive habits & come up with innovative ways to prevent ourselves from ruining earth before its too late.

The real question is if energy corporations are willing to trade in their profits to save the world. While this seems like an easy choice to make, the allure of money has a way of perverting people’s priorities.