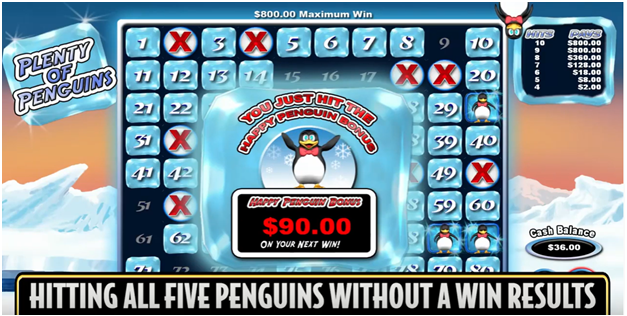 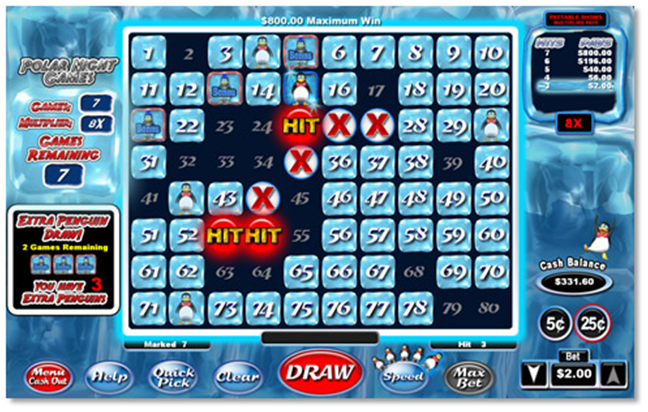 Penguins are not only triggered for the Progressive award, they also trigger the Caribbean Vacation “Free Game” feature where the player is awarded 15 Free games with the paytable multiplied by 2X when they Hit 4 penguins with a WIN during gameplay. They also act as multipliers for your bet when combined with a win during normal game play (when only 5 penguins are displayed), and during the Extra Penguin Draw Feature, when up to 3 additional Penguins are distributed on the Keno grid with the other 5 Regular Penguins. 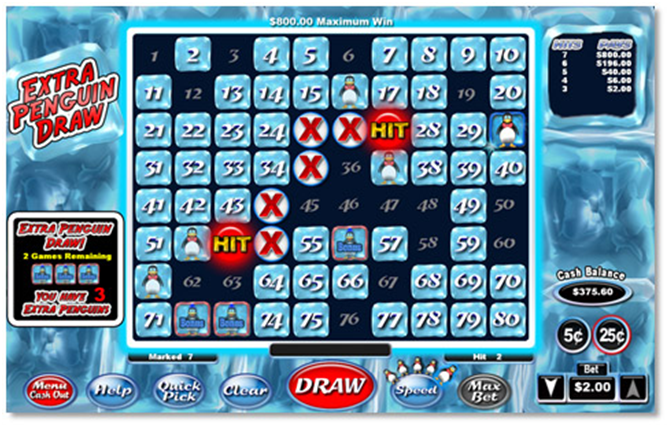 The Ice Fish’n Feature is a random event that is banked until a player win triggers the event that awards PLAYER PAID BONUS games and multipliers for the “Polar Night Games”. Once the feature is triggered, the Player is shown a screen with 2 Penguins. The Player is prompted to one of the Penguins to start the feature; this will determine the multiplier for the Player Paid Games the Player will get. The Penguin then jumps into the lake and brings up a fish and the number of games awarded appear above them.

“Do It Again” is a randomly occurring feature that can happen after any win, inclusive of features, bet multipliers and progressives, (except in Free Games) with a combined payback outcome of $400 or less. After the player has a win, the same game is played again with the same draws and hits and the paytable win amount is awarded one more time. 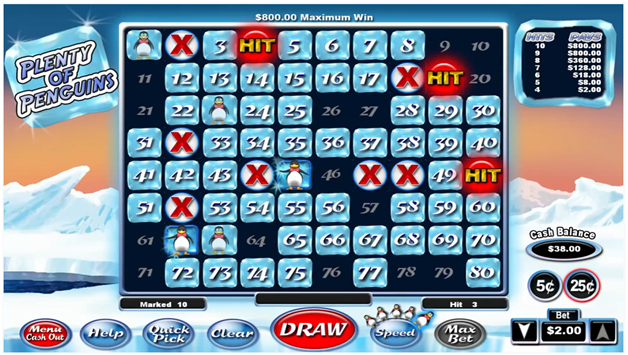 Free Games are triggered by hitting 4 Penguins with a win. The Player is awarded a 5X or 7X multiple of their bet (depending on whether they are in a Standard Game or Extra Penguin Draw game), The Do It Again feature if applicable, and then taken to the “Penguins Caribbean Vacation” Free Game feature where they are automatically awarded 15 Free Games with a Paytable multiplied at 2X. They cannot change their bet for the duration of the 15 games. There is one Free Game Bonus Penguin randomly marked on the Grid which when hit, will award an extra Free Game to the Player. No other features can be triggered during Free Games.

Now play this game at online casino of your choice for free or with real money.