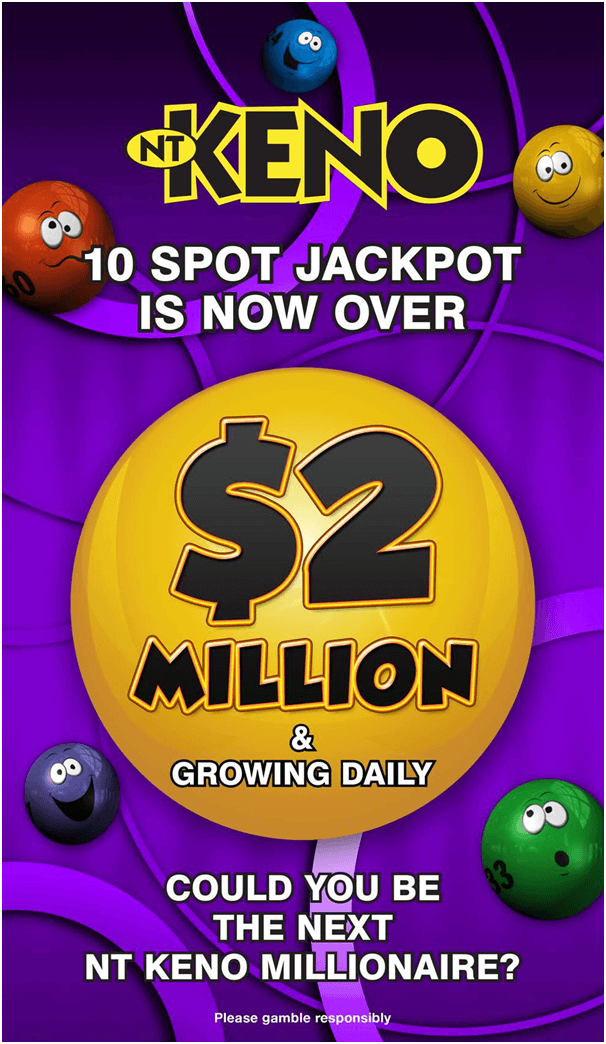 Territorians have won more than $41 million on NT Keno in the last 12 months. The latest winner grabbed $2 million in Keno jackpot after taking out the NT Keno 10 Spot Jackpot. The fortunate punter purchased the winning ticket worth $1.956m from the Buff Club in February 2018, with the lucky numbers coming up on game #310 just five minutes later.

Last year another winner went to the Skycity and purchased a $10 ticket using his lucky numbers on a Sunday afternoon in August, winning the 10 spot jackpot valued at over $2.4 million.

According to the winner you have to be in it to win it, and with more chance of winning 10 spot than Oz Lotto, why play lotto when you can play NT Keno?

NT Keno it is only available across the Territory, from Cape Crawford to Humpty Doo; therefore all the winners have been in the Territory, making it Territory unique.

NT Keno has some of the biggest jackpots in Australia and being Territory unique you do not have to compete with the rest of Australia to win the jackpots. This is proven by 1133 jackpots being won in the past 12 months. With a minimum spend of $1 per ticket, there are lots of ways to play. The new 10 Spot Jackpot is already sitting at over $1m and with $1 and your lucky numbers, you could be the Territory’s next millionaire.

Most people have a lucky number which they will use with NT Keno, and being Territorians there are a lot of stories on why it is their lucky number too. If you do not want to choose your lucky numbers you can always get the system to generate the numbers for you, or play Heads or Tails where you can double your money. 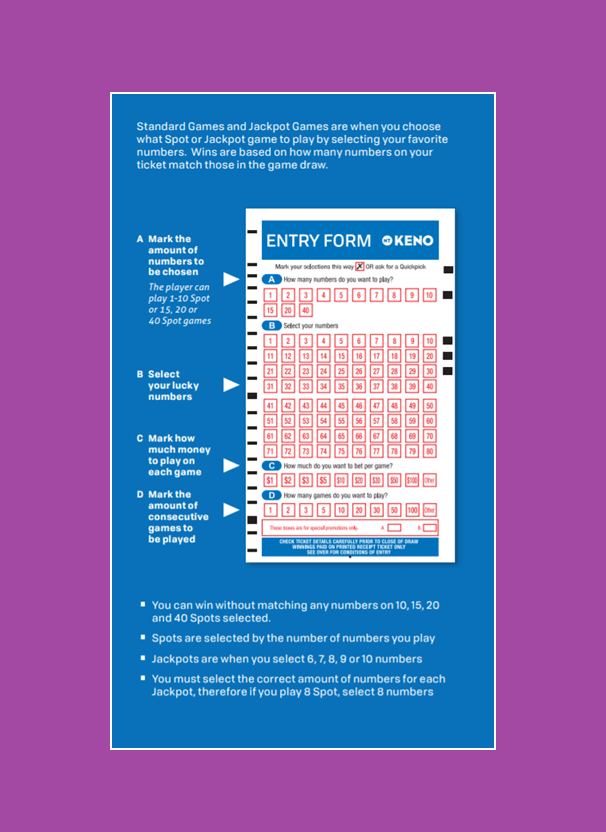 NT Keno is an easy numbers game where 20 numbers are drawn from a total of 80. You can choose from 1-10, 15, 20 or 40 numbers per game. Play a game for a minimum of $1, no matter how many numbers you choose to play. Match your numbers for your chance to win.

NT Keno offers a range of bets and prizes. Choose your own numbers or try your luck with a Quick Pick. Wins are based on how many numbers on your ticket match those in the game draw.

Where you can play NT Keno? 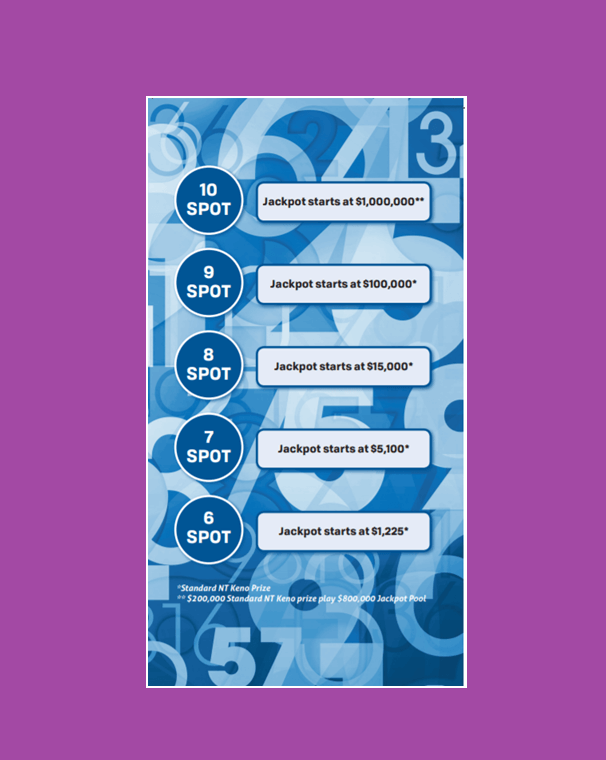 See where the nearest one to you is:

You must be 18 years or over to enter the Keno Game.

How to play NT Keno? 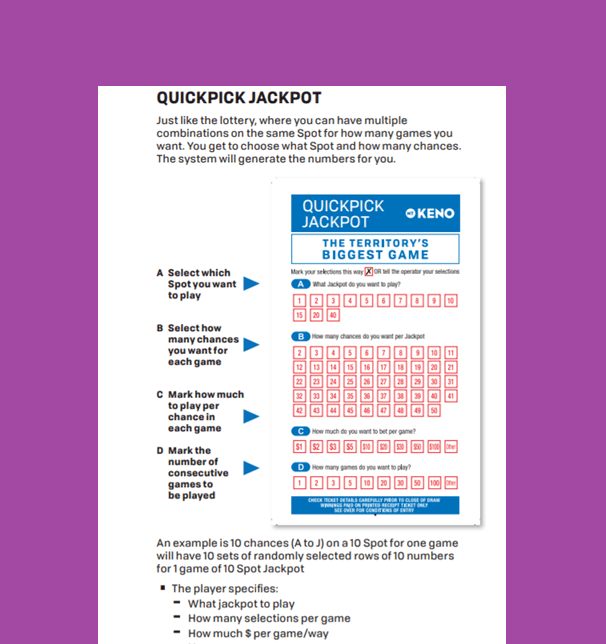 As there are several NT Keno games options, you can pick your own numbers including how many number you want to play or you can purchase a quickpick which selects the numbers for you.

The amount you win depends on how many of your numbers match those that are drawn. Use the NT Keno prize table to find out how much you have won or present your ticket to any NT Keno operator.

Standard Games of NT Keno: Here you can choose your own 1,2,3,4,5,15,20 or 40 spots to play. The payout amounts are increased proportionately to the bet amount.

Jackpot Games: NT Keno Jackpots 6,7,8,9 and 10 spots have a minimum value and continue to grow until they are won. The 10 spot jackpot has a minimum of $1 million prize money. 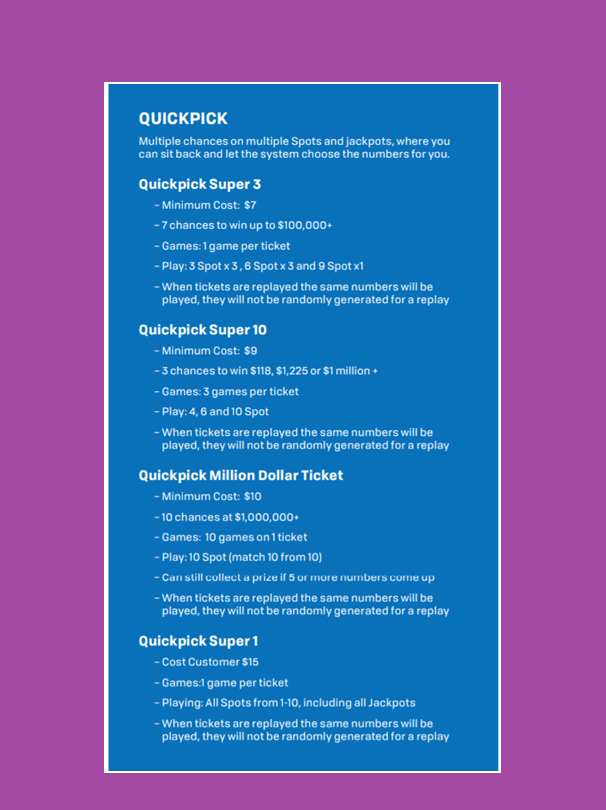 Quickpick Jackpot: Choose how many combinations and how many games on which jackpot. The numbers will be randomly generated and you will have more chances on each game on the same ticket.

Quickpick: If you cannot decide on what’s your number then there are several Quickpick options where the system will randomly pick the numbers for you. 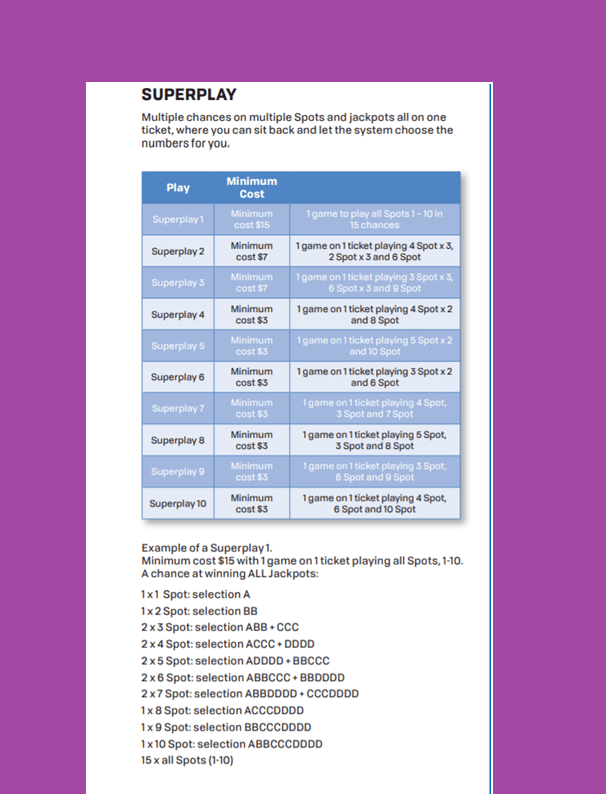 Super Play: Superplay are preformatted Way bet which allow you to play several combinations on the one ticket and gives you the chance to play more than one spot and or jackpot per game. With all Superplay games the system will randomly pick the numbers for you. 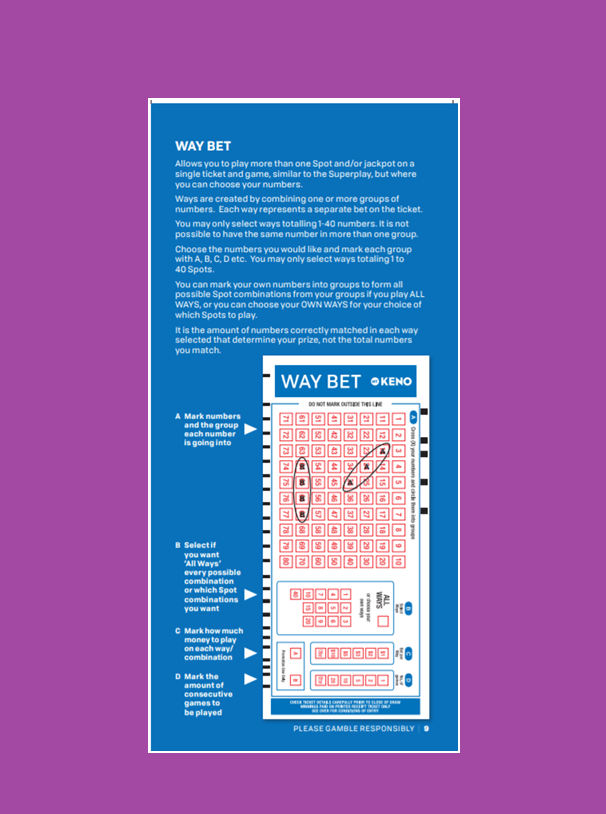 Way Bet: Similar to superplay but you will need to choose your own numbers and ways, rather than having system generated numbers. Ways bet allows you to play more than one bet on a ticket increasing your chances to win. 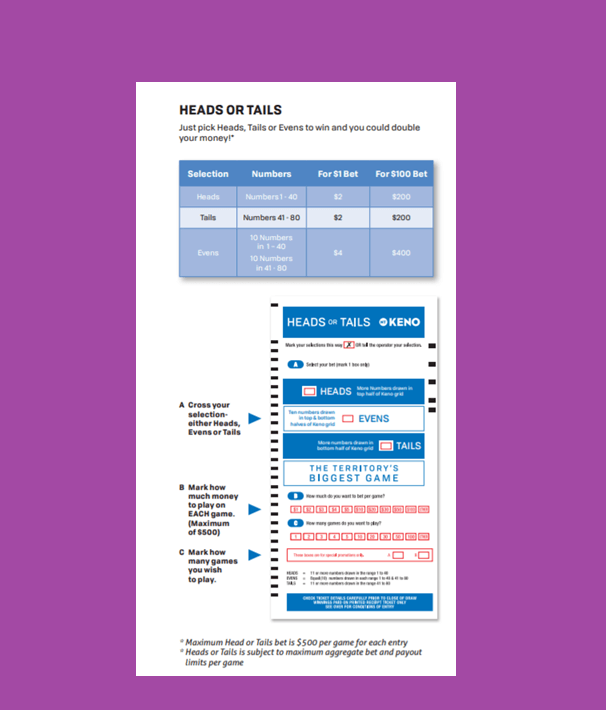 Heads or tails: You can choose if the most drawn numbers will be in the top half of the grid(heads), the bottom half of the screen (tails) or equal amounts in both (evens).

NT Keno winnings are paid out on the printed receipt ticket only and can be claimed through any NT Keno terminal up to 365 days after the bet has been placed. Also NT Keno results are not official until all numbers are drawn and confirmed.