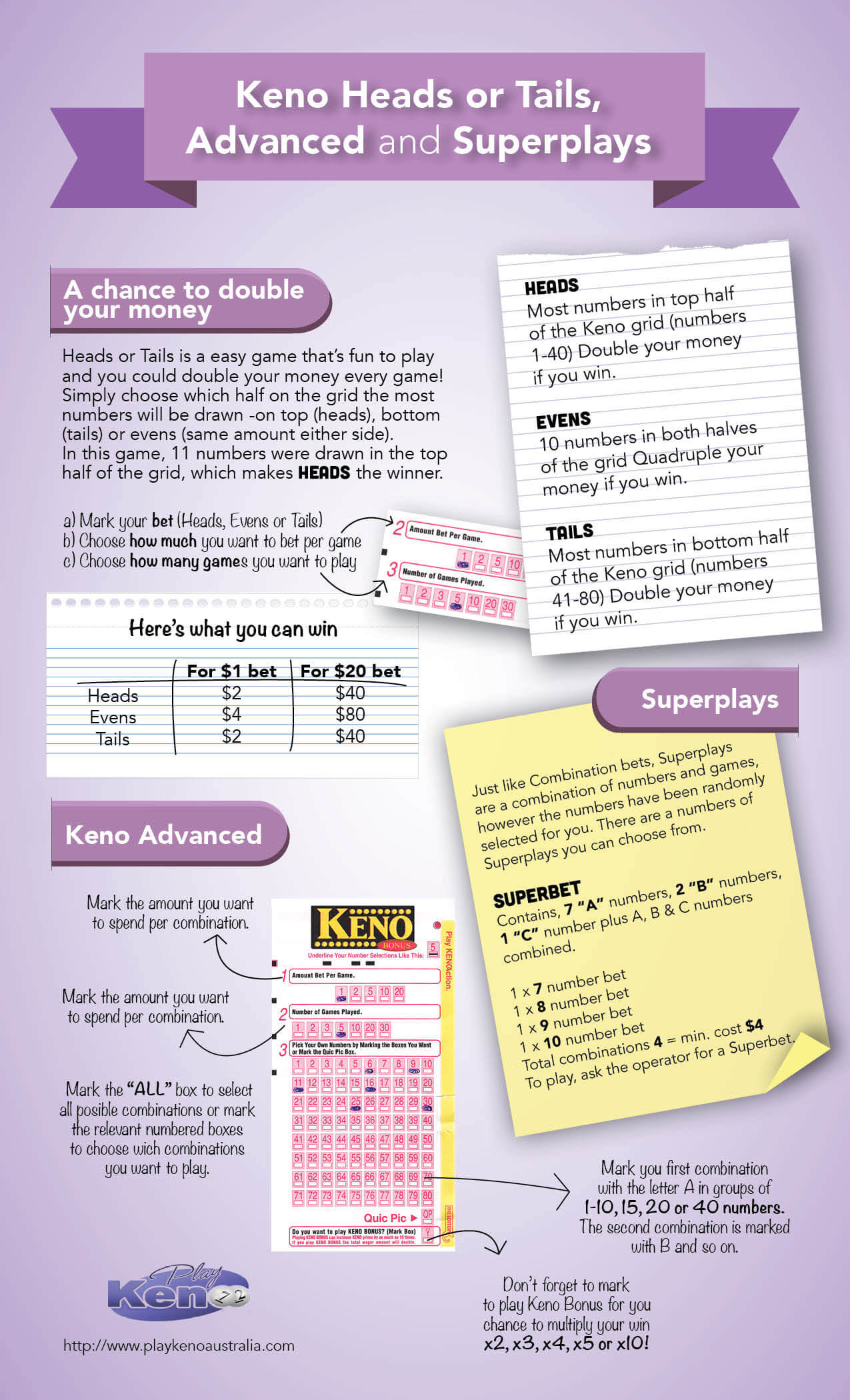 A chance to double your money

Keno Heads or Tails is an easy game that’s fun to play and you could double your money every game! Simply choose which half on the grid the most numbers will be drawn -on top (heads), bottom (tails) or evens (same amount either side).

In this game, 11 numbers were drawn in the top half of the grid, which makes HEADS the winner.

How to play Keno Heads or Tails?

a) Mark your bet (Heads, Evens or Tails)

b) Choose how much you want to bet per game

c) Choose how many games you want to play

Here’s what you can win

For the more advanced Keno players, multiple entries in each game can be played on one ticket. Simply grab a Keno Advanced entry form and increase your chances of winning! So as said above combinations are created by grouping numbers. To do this, simply mark your first combination of numbers with the letter A (instead of the usual cross).

The second combination of numbers is then marked with a B, the third with a C and so on. Just remember, you can’t use the same number in more than one group. Refer to page 15 for minimum Keno Advanced costs. It is the amount of numbers correctly matched in each combination that determines your prize, NOT the total numbers on the ticket you match.

b) Mark the “ALL” box to select all posible combinations (in this cae two groups of 3 numbers and one group of 6) or mark the relevant numbered boxes to choose wich combinations you want to play (for example, cross 3 to play two 3 number games).

c)Mark the amount you want to spend per combination.

d) Mark the number of games you want to play.

Don’t forget to mark to play Keno Bonus for you chance to multiply your win x2, x3, x4, x5 or x10! The best way to learn Combination bets is to give them a go!

Keno Superplay gives you the ability to play one or more spot types on the one ticket, giving you multiple chances to win in one game.

Selected Superplay tickets allow you to play your numbers in a pattern or a shape, such as a love heart or a football.

How to play Keno Super Play?

To play, ask the operator for a Superbet.

Other Superplay games you can play are:

To play, ask the operator for a Superplay 7.

To play, ask the operator for a Superplay 8.

To play, ask the operator for a Superplay 9.

To play, ask the operator for a Superplay 10.

So Superplays allows you to select a combination of numbers in a shape or pattern (e.g. QLD, NSW, Heart and Cup), bringing more fun to your favourite numbers game. Each Superplay is flexible, meaning that you can change the number of games you’d like to play.

Click here to view a full list of the 41 different Superplays that are available to play at your local pub or club.

To buy these tickets in a venue, simply ask the Operator for the number of the Superplay corresponding to the theme you like.

All these Keno games can be played at Keno Australia, at your nearest lottery retailer or at any TAB Keno Touch Machine.