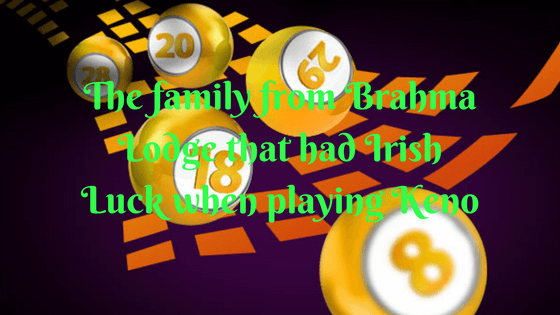 Recently on St Patrick’s Day a family from Brahma Lodge had their Irish Luck on them when playing Keno. Irish luck is also a name of pokies game which is 5 reel and 30 line where you to obtain a winning symbol combinations you need to spin the reels. But this mother and father duo did not played this pokies game but KENO and grabbed $50,000 as the luck of the Irish fell on them.

So this confirms another thing that not only people from Ireland can have extreme good fortune but also Aussies as Brahma Lodge is a northern suburb of Adelaide, South Australia and it is located in the City of Salisbury.

The amazing thing was that the mother and father visited SA Lotteries to claim what they thought was a $500 prize and discovered it was actually 100 times the size. It was because their Keno Spot 8 entry came up with all 8 winning numbers and landed them a prize of $50,000!

It is not only the parents that love to play Keno but also their daughter who all went crazy when she heard this news. According to the winners their daughter goes halves in Keno tickets with them each week.

Even the the Assistant Manager at Topz Shopz Brahma Lodge Bec Schultz was delighted to know they had made a local family $50,000 richer.

Last year a man from Adelaide’s coastal suburb of Henley Beach had pocketed a $50,000 Keno Spot 8 prize, after his eight winning numbers popped up on the Keno screen at his local newsagency. Also another man from Morphett Vale had an extra reason to celebrate after he discovered the news he was $50,000 richer thanks to a Keno Spot 8 entry he purchased at the Emu Hotel!

Playing Keno is easy and gives you the chance to win a minimum of $1 million every 3.5 minutes. In every Keno game 20 numbers are randomly generated from a possible 80.

You can choose how many numbers you wish to play, which is referred to as a ‘Spot’. Spot 1 means you can select 1 number, while Spot 10 means you can select 10 numbers. To win a Keno Spot 8 prize, a player must match all eight of the numbers selected on their ticket against the 20 numbers drawn. So try your luck too.