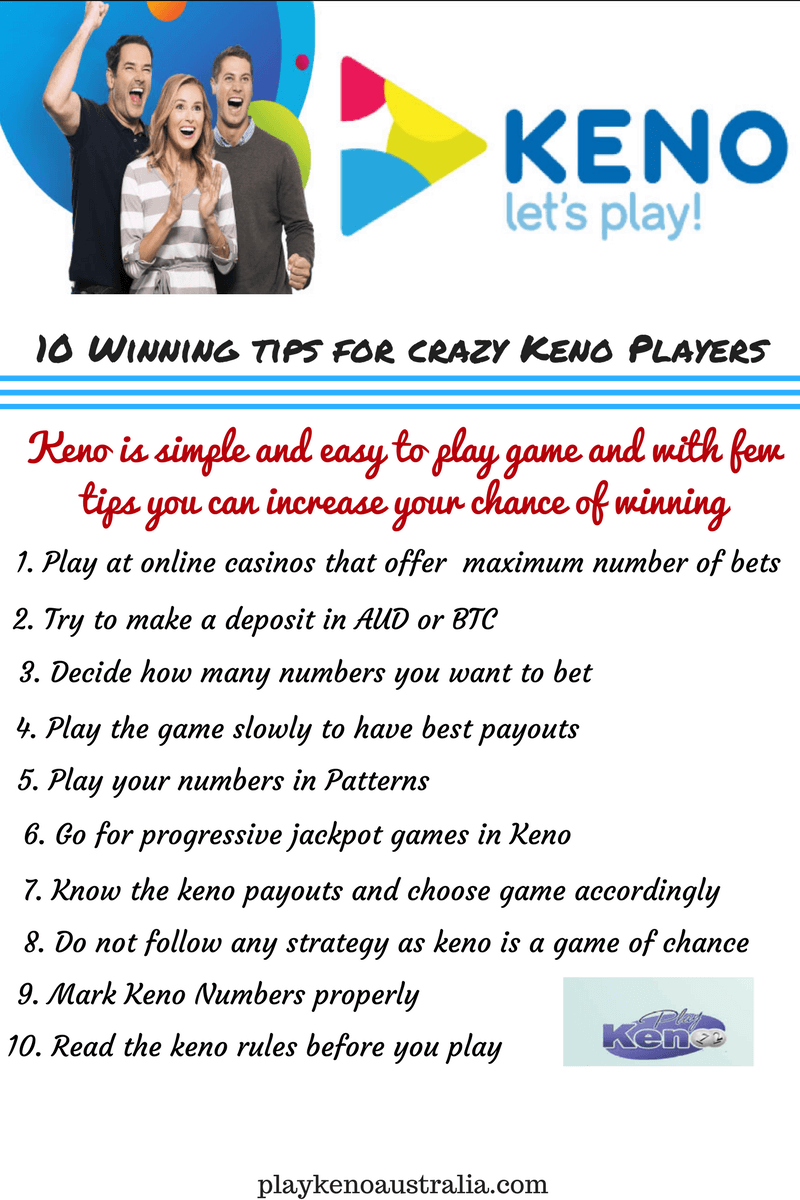 Keno is a simple and easy to play game which requires no skill at all to play the game. This lottery style game  comes with elements of bingo and roulette, and is played by Aussies which have many winning stories. It is estimated that Aussies spend almost $1 billion each year gambling on those big Keno jackpots.

But you need to know some winning tips so that you get a chance to win big.

Before we start on the winning tips note that in Keno lotto game, players select their gaming numbers from a range of 1 through 80 and lay a bet. You can usually choose up to ten numbers.

20 numbers are then randomly drawn as winning numbers. Players who match all (or a combination of) numbers receive a pay-out.

The game can be played electronically using gaming machines or you can participate in live games where numbers are drawn manually.

In Australia, you can play Keno at most of the state casinos but the most popular way to get involved is via the Tabcorp operated game of instant win Keno.  However, the Tabcorp game is not available in Western Australia where you can only play Keno in the Crown Casino, Perth and South Australia where the games is run by SA Lotteries.

Governed by different rules depending on the state you are playing in, Tabcorp’s Keno offers a simple way to play and the chance to win some big prizes.

Games can be purchased from $1 (Keno Classic) and $2 (Mega Millions) with a chance to win $1,000,000 and $5,000,000 respectively. Games can be played via the website or using the app on your iOS device whilst in a mobile play area. You can also play at Keno terminals available in pubs and clubs across the country (except WA).

Live draws are played every three minutes.They also offer a way to double your money by playing Keno Heads & Tails; simply select from a choice of where the majority of drawn numbers will appear on the winning grid:

Rules for online gaming vary by state but are governed by the Interactive Gaming Act meaning only licensed sites situated in Australia can offer cash prize games.

Keno is also available to play via online casinos like Casino Mate, Fair Go Casino and House of Jack or Rich Casino. These casinos allow you to play Keno online with AUD or BTC currency so you don’t have much of a problem playing Keno from Australia in real time.

Here are the 10 winning tips for crazy keno players. You can use these tips by playing Keno lottery or when playing keno at online casinos of your choice.

1. Play at online casinos that offer maximum number of bets

It is advised that you choose that online casino that offer maximum number of bets and do not impose a restriction on those bets. There are many keno games nowadays that incorporate a Bet Max button or tab that automatically places the maximum bet with 1 click. The reason that betting max is important in keno is because there are numerous games in which the Jackpot or the progressive Jackpot feature can only be won when you bet the maximum.

This can dictate though, whether or not you can afford to play that keno game in particular, because if your budget for a Keno session is $50 and the maximum bet is $5, you’re not going to get value for money, as unless you run very hot, your kitty will be empty in no time. You should always bet max when there is a possibility of getting to the free spins or bonus rounds. You should also bet max when you have the sole aim of hitting a progressive jackpot.

2. Try to make a deposit in AUD or BTC

These days most of the online casinos have started accepting Digital currency to play Keno. Where you don’t find a casino offering your own currency but offers Bitcoins then also you can enjoy Keno. Also making a deposit in AUD is hassle free and is done instantly without any conversion fee. Similarly for Bitcoins there is a small fee to process it in Digital currency and is done within minutes taking no time to make a deposit.

3. Decide how many numbers you want

4. Play the game slowly to have best payouts

One of the key differences between Keno at land based Casinos and online casinos is the fact that keno online is played at a faster pace. Typically, once the numbers are drawn in game at brick and mortar casinos, you’ll have to wait for a game to finish but at online casinos you don’t need to wait. Instead, you can simply play again and again for as long as you want. Although this can prove to be advantageous, you shouldn’t get carried away as you’ll end up betting too much money.

5. Play your numbers in patterns

Although keno is purely based on whether or not you have lady luck on your side, it could be just as handy to use a pattern when selecting your keno numbers, rather than sporadically spreading your numbers all over the spots.

This is because keno numbers are picked by a computer, and although it is completely random, there is still a greater chance the computer will select numbers in a pattern. That said, it is almost impossible to pick the same pattern a computer would pick, unless you can predict the future – so your pattern is once again up to chance.

If you play online keno enough, you should notice the random number generated computer continuously fills in three or four numbers in a row or column. You might even start to recognise a pattern that looks like a box, or maybe like a hat, or perhaps a letter ‘L’ or ‘T’.

If you keep looking, you might even eventually notice recurring patterns are occurring; this is all explainable by statistics. Since there are 20 numbers drawn out of a possible 80 (in a traditional game), 25% of the numbers on the board will be picked. With that high of a percentage being drawn, it’s far more likely to have several of the picked numbers adjoin one another than it would be to have them all land a space or two apart.

This doesn’t necessarily mean your pattern will work. Due to online casinos being fair and random, there is no way a certain pattern can be programmed or avoided. But it can’t hurt to pick that random pattern to bet on if you start seeing it recurring.

The amount you can win in Keno fundamentally depends on how much the casino is offering. Typically, a casino will indicate how much you’ll be able to win on the ticket. However, if you’d rather be in the chance of winning big it is recommend playing Progressive Jackpots instead with its massive jackpot.

Always study of the online keno payout table  that will reveal some good bets. For example, if you pick anywhere from 7 to 11 keno numbers, you need 3 hits to break even. So it makes sense to pick 11 numbers. For one thing, your odds of at least getting your original bet back are higher, since it is easier to hit 3 out of 11 than it is to hit 3 out of 7. At the same time, the maximum payout on an 11-spot ticket is 3,000-to-1; on a 7-spot ticket it is only 100-to-1.

So picking 11 keno numbers makes more sense than picking 7, 8, 9, or 10 numbers, any way you look at it. Your chances of at least breaking even are much higher, and your maximum potential winning keno payout is also much higher.

There is no as such strategy to follow when playing keno as it is pure your luck whether you win or lose. Following any strategy as such will make more things complex. It is no secret that casinos often advise you to gamble on games with the best odds, tricking you into believing that this is the only way to maximize your chances of winning, but that is exactly how you end up losing your money, so you should take what casinos say with a pinch of salt.

You begin with a ticket that has the numbers 1 to 80 on it. You mark up to 10 or 15 spots on the ticket and face a payout table that depends on the number of spots marked. 20 numbers are drawn at random and you receive a payout from the relevant table based on the match between the marked and drawn numbers.

In general, on tickets that combine to make an even number, it is best to play groups ½ the size of the way. For example, a way 10-spot is best played using groups of five. For odd number ways, pick the two numbers on each side of the mean, in other words a way 11 is best played using groups of five and six. When choosing your keno numbers mark the X properly on the selected numbers.

10. Read the keno rules before you play

It is important to read the keno game rules before you play so that you don’t make any mistake. All the games at online casinos have rules to play. These rules are given on the game menu screen or on help section of the game.

Many times you will also be able to enjoy free games which allow you to play the game even when you don’t have money. New players also like to try the free games first, so they get to learn the game before they spend their own money on the games. You will get to know the features of the game, bonus offers and other such things in the game rules.

Now enjoy Keno with your PC or mobile online at casinos or with Australian lotteries.